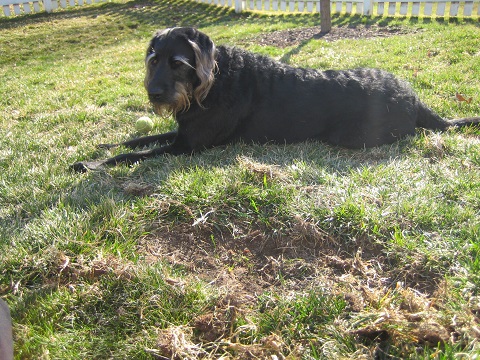 After the hard winter we had in the Midwest, Doc and I were happy to get back out in the yard and start working on some landscaping projects. I started one last fall when I was still a puppy and worked on it all through the winter when ever the ground would thaw out. By spring I had cleared a large space of sod and dirt. The snow covered up my hard work, so  Doc was unable to see or fully appreciate the beauty of what I was creating, until one warm spring day when all the snow finally melted away.

I was so proud to show Doc what I had accomplished and stood over the hole with my tail wagging, waiting for her praise. Much to my shock, when Doc saw what I had been doing all winter, she got mad. She stood next to me with her hands on her hips and then her face turned so red, that I thought for a minute her head was going to blow off. She glared at me, turned on her heels and headed for the garage. When she returned she had a rake, some grass seed, straw, a hammer, some green fencing and posts. I stood there in amazement as Doc made short order of filling up my hole and then she put a big green fence around it. When she was done, she was sweating and muddy. She glared at me, pointed her finger and told me to stay away. She didn’t need to tell me twice.  As she went back into the house I decided to lay low until things calmed down and spent most of the morning on the back porch sulking and nursing my wounded pride.

Later that afternoon, Doc came back outside in a better mood holding a bunch of tools and some potted flowers. I became very confused when she knelt down and started digging her own holes in the ground. Thinking it was now ok to dig, I went over to help her and she got mad again! “What is it with you humans?”  Doc just glared at me and said “Grover, what is wrong with you?” Clearly Doc and I had a communication problem.

A few days passed when one day Doc came home from the  hardware store with some railroad ties and two big bags of sand and dirt. To my amazement I watched as she went over to the corner of the yard, put the railroad ties in a square and filled the middle with the dirt and sand mixture. Then she buried my favorite bone and some of my toys in the dirt. She looked at me smiling and said “You can dig here, not in the yard or the flower beds, understand?” In response I wagged my tail with glee.

I have to hand it to Doc, just when you think you’re doomed to a life of boredom, she comes up with a  wonderful compromise that we can both live with.