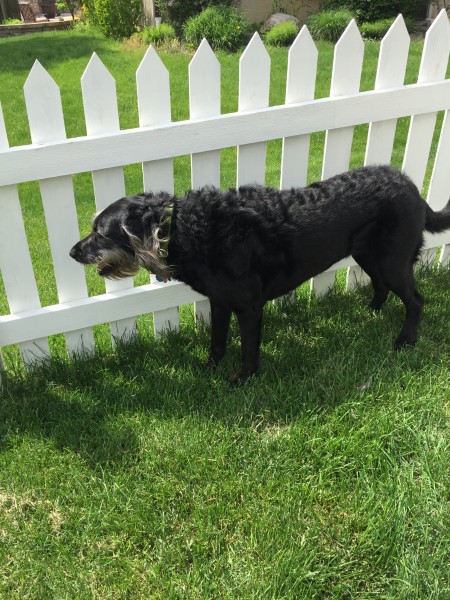 My new partner in crime is only 3 years old and about 26 inches tall. His name is Mason. Don’t be fooled by his small size and angelic face, as the two of us have been quietly working on an escape plan since he was two.The only thing that keeps us apart is a 4 foot picket fence with a latch. I have been dreaming about the day when Mason would be tall enough to reach that latch and open the gate so that we could play together in the big field behind us. Now that time has come. I watched from the window the other day as he unlocked the latch and the gate swung open. His horrified mother told on him and Doc now has secured the gate with wire, but I think Mason is smart enough to figure that out before long.

Mason and I have a long relationship. He has come over to that fence since he was able to toddle, pushing toys under the fence and letting me lick his popsicle on hot summer days. I know he is the perfect boy for the job because I have watched his parents become exasperated, trying to get him to listen to them. They say he breaks the rules like that’s a bad thing, when in fact Mason is just following his own path in life. Mason is a rebel and like all the rebels before him, I think he will eventually channel that energy to do good in the world.

I can really relate to Mason, as I fancy myself a rebel as well. I try to defy authority but like the John Cougar Mellencamp song goes ” I fight authority, but authority always wins.” The  problem for characters like Mason and myself, is we still have to rely on older humans to provide food and housing so we have to let them boss us around for now, but very soon our day of freedom will come.