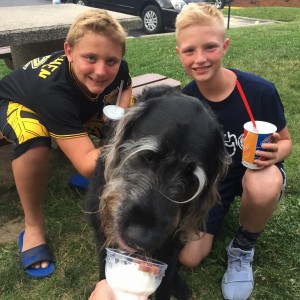 When I woke up on Thursday morning who knew that by that evening, two young boys visiting from Pittsburgh would lead me to the promised land. It just goes to show you that your life can change from the mundane to the divine in an instant.

At about 10am, the doorbell rang,  and much to my embarrassment, Doc opened the front door holding a bag of my poop she had just picked up in the yard and was going to throw away. As awkward as that seemed it didn’t faze the two young boys as they came bounding into the house through the front door. Not the least bit tired from their 3 hour trip down the highway, they were ready for action and I was thrilled! They ran right over to me and I responded with a wagging tail and big slobbery kisses to the face. I cleaned out their ears free of charge. (Believe me when I tell you they needed a good cleaning). We ran around in the back yard for a while and just as fast as they arrived, they went flying out the back door with Doc and her friend for a day of fun at the water park. I have to admit, I was ready for a rest, those two boys had a lot of energy.

Many peaceful hours passed when suddenly the back door flew open and the thundering herd was back. The aroma of pizza filled the air, so I stuck close by until one of the boys named Jackson dropped a pepperoni on the floor that I ate in a flash. When dinner was over they asked, “what are we going to do now?” ” Let’s go out for ice cream” Doc said. ” Can Grover come along?” they asked.   And with a nod of agreement, we all piled into the car and headed down the road to Dairy Queen.

Now I don’t want to say that Doc has been holding out on me, but she has. When we got to the Dairy Queen, Doc and I stayed outside while everyone else went in and got their orders. Usually when Doc and I go she gets her ice cream and that’s it, I am just along for the ride.

Soon the boys returned and surprised me with the a most heavenly treat of all treats called a Doggie Sunday. A cup of ice cream with a big dog treat on top. I kind of gave Doc the stink eye while I was eating it. I though she might have been too cheap to ever buy me one, but she claims she didn’t know they had such a thing. She can’t claim that no more. Thank goodness for 11-year-old boys that love dogs.