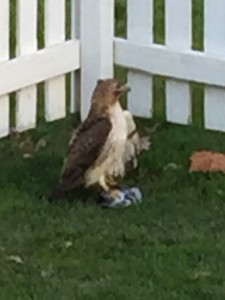 It was one of those beautiful spring days where the temperature was perfect and a light breeze blew the scent from the lilac blossoms through the air. I had been enjoying the day laying in the lush green grass when I decided to go back into the house to wait for my supper. Doc got up and opened the sliding glass door to let me in and I sprawled out on the rug next to Doc’s chair while she was watching the news.

We had just settled in when we both saw a large form speeding toward the glass door followed by the sound of a large whack against the glass. Both of us jumped up to see a large red tail falcon and a morning dove lying startled on the patio floor. You could almost see the stars circling around their heads as they tried to recover from hitting the glass. The dove flew away first and was quickly followed by the falcon. It only took a second for Doc and I to realize that the dove was meant to be the falcon’s dinner.

I saw the horror on Doc’s face as she watched the falcon catch the morning dove and kill it. Now Doc grew up in the country and has heard things being killed in the night and found left over carcasses outside, but she has never watched the chase and final demise of such a gentle bird as a morning dove. I could tell it was getting to her when she left the room for a while. Being a canine and a bird dog, I felt the opposite. My primal instincts kicked in and I just wanted to get outside, catch that Falcon and bring it home to Doc for our dinner.

Moments later, a second falcon landed on the fence to supervise. At first we thought their might be a fight, but we soon realized that this was the mate, coming to help carry dinner back to the nest. It wasn’t long before they flew away with their prey, leaving only the feathers behind.

Through out the next day, I could tell that Doc was still unsettled by what she had witnessed the evening before. Nature does have a way of reminding us that there is indeed a circle of life and that it can be brutal to watch.

After arriving home from work that afternoon, Doc happened to look in the back yard and noticed that little brown sparrows were picking up the dove feathers and carrying them up in the tree to build a nest for their future family. I saw a smile come over Doc’s face as she realized that new life would soon begin.