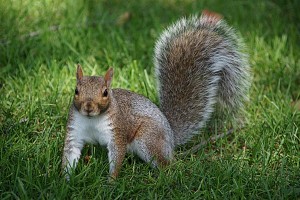 You wouldn’t think that a cute little grey squirrel could hold an entire college town hostage for the summer, but that’s exactly what happened, right here in the place that Doc and I live. Before the siege was over, seven people were treated for squirrel bites and the residents were left afraid to leave their own homes.

It all started on a beautiful morning when an unsuspecting woman saw a squirrel on her porch. As she came out the front door to try and shoo it away, it ran toward her, went up her skirt and bit her on the genital area and her leg. She was forced to seek treatment from her doctor for minor injuries. The next attack came when a man leaving a college building was chased by the squirrel.  As the man ran to get away he looked back to see the squirrel leaping in the air higher than he had ever seen a squirrel leap.

Soon the reports started coming in to both the campus and town police and cruisers were dispatched to patrol the streets. Finally, one of the officers spotted the squirrel, cornered it and attempted to subdue it by using his baton, but the squirrel unperturbed by the encounter got away. ” This is no ordinary squirrel we’re talking about,” one of the police officers was quoted as saying.

In spite of the large police presence the attacks continued. The squirrel lunged at a UPS man while he was trying to deliver a package. ” I tried batting it away with my clipboard, but the squirrel got more aggressive and bit me on my knee.”

One family that had been harassed by the squirrel for weeks, resorted to using the back door of their home to leave as the squirrel would not let them out the front door of their house. “What is strange, is that he tries to act friendly at first and then when you get close to him, he attacks, ” the family reported.

From this dog’s perspective, this is clearly a squirrel with an axe to grind. Only Doc could get to the bottom of this squirrel’s issues. The strange thing about the whole, is that one day the attacks just stopped. Obviously the squirrel had worked through whatever motive he had for attacking humans and moved on. But, I will say one thing, after hearing about this, I sure will keep my eye out for the squirrels in my neighborhood. You never know what kind of evil, aggressive squirrel might be lurking in the trees get ready to pounce.