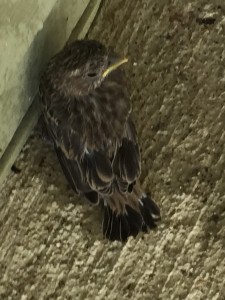 You would think that Doc could engage in some simple yard work without getting involved in a wild nature encounter, but that would be boring and would not make for a very interesting story.

It was just a normal summer morning and Doc had just finished mowing the lawn and weeding the flower beds. She decided to get out the hose and water the ferns hanging from the front porch. Everything was quiet until she got to the last fern. As the water from the hose began to spray, a baby bird started squawking and flew out of the nest on to the floor of the porch where it flopped around trying to fly away. Doc thought that it’s wings were not yet strong enough to fly back up into the nest, so she decided an intervention would be in order.

After getting on her garden gloves she attempted to pick up the bird to put it back in the nest. The only problem was that the bird wanted nothing to do with Doc. Every time she would reach down to pick up the baby bird it would start shrieking and then flap its wings to get away. I have to say, for a baby, that little sucker was fast. Doc chased that baby bird all over the porch, down the steps and across the front yard until finally she corned it in the bushes. As she gently picked up the bird and placed it back in its nest inside the fern she thought her mission was accomplished, but no, that little bird flew right out of the nest again.

As entertaining as it was to watch Doc versus nature, I was starting to feel her worry and frustration over the baby bird. I knew she was concerned that the neighborhood cat would make a meal out of it if it didn’t stay in the nest. So she herded it back toward the bushes where at least it would be out of site.

As we went about finishing up our chores, that  baby bird was still on Doc’s mind, so she decided to check on it one last time. When we came around to the front porch, we were surprised to see it back up in the fern. Now I don’t know if the mother bird had returned to help its youngster or if it had just been faking that it couldn’t fly, but I swear I saw a smirk on that bird’s face as it looked down on us.