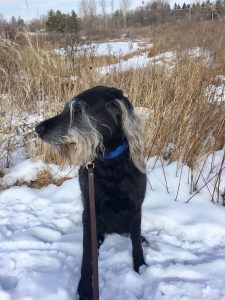 When Old Man Winter slaps half the country with a major winter storm , it is a big reminder that humans are really not in control of everything.

The meteorologists started predicting the coming of the storm starting late last week. You could see the excitement in their eyes as they went over their maps and talked about fronts and wind chill factors. I watched with feigned interest not realizing that Doc was quietly making a list to prepare, but now that I look back on everything it is starting to add up. She did go to the store on a day she doesn’t usually go and made sure there were logs for the fire. Then on Sunday night she started charging all the electronic devices before we went to bed.  She has often told me that she learned in Girl Scouts the it’s best to prepare in advance instead of waiting for an emergency to happen.

The storm was suppose to arrive here on Monday but were surprised when we woke up to find only three measly inches of snow. After Doc and I walked down to the park and shoveled out the driveway she decided it was time to get some other chores done. I was not happy to find out that one of the chores was to give me a bath. The only good thing about that was that she took me to my favorite pet store where they have a dog bathing area. I did my best job of acting extra pathetic while she bathed me so that she would feel guilty and it worked. I picked out the most expensive treat to take home. As we walked outside you could tell that a storm front was moving in and it looked ominous.

As the afternoon turned into evening we could hear ice pelts starting to hit the window and roof. We were surprised as they had been predicting up to 8 inches of snow not ice. At bedtime I curled up right next to Doc for comfort as the wind started howling against the house. By morning some more snow had fallen on top of the ice and what a mess that created. Luckily our nice neighbor Aaron came over with his snow blower to clear the driveway and sidewalk. Watching the news we were shocked to see the devastation from the storm to areas of the country that are not prepared for this type of weather. We counted our blessings that we had remained safe and warm.

This morning the sun is shining, but don’t be fooled, it is only 6 degree’s, enough to freeze a dogs behind off and on Thursday  they are predicting another round of snow. Who knows what that will bring, but there is no doubt that Mother Nature gets the last word every time.