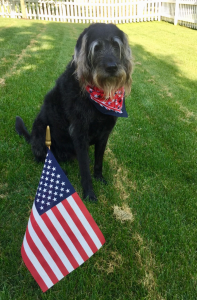 Since tomorrow is the 243 birthday of the United States, I decided to brush up on my United States history by reading the Declaration of Independence. On July 4, 1776 the Continental Congress declared that the thirteen colonies of America were no longer subject to British rule and were now free and united.  ” We hold these truths to be self-evident that all men are created equal, that they are endowed by their Creator with certain unalienable Rights, that among these are Life, Liberty and the pursuit of Happiness.”  After some reflection I couldn’t help thinking that Doc treats me a lot like the king of England had treated his subjects and decided it was time for a revolution. My mistake was bringing that to her attention.

Wandering into her office I found her lost in thought about a patient she had just seen and I asked her if I could have a minute of her time. “Sure Grover, what’s on your mind?” she asked with a smile. ” Well Doc, I have been reading the Declaration of Independence in preparation for tomorrows holiday and I wanted to let you know that according to this document that you are violating some of my rights. I think that it is time to follow the forefathers of this country and dissolve the political bands that have connected us. Further more it is my right as a dog to abolish the current form of oppressive government you have me living under and institute a new government to protect my safety and happiness.”  Without even hesitating she said ” Ok that’s fine.”.  I have to admit I was a little startled by her blase response and then she said, ” You know that means you will have to set up your own government, provide for yourself, live somewhere else, buy your own food, and pay your own bills don’t you?”

I sat there is silence for a moment and said, “Well I guess I never thought it all the way through Doc.” ” How about a compromise? she asked. You tell me the changes you would like to see and we will come up with a plan. That’s how democracy is supposed to work she said. Remember Grover, it’s always important to tell me how you are feeling. I am not a mind reader you know. Now let’s go home and get ready for our 4th of July cook out.” And with that my little revolution ended before it even got started.