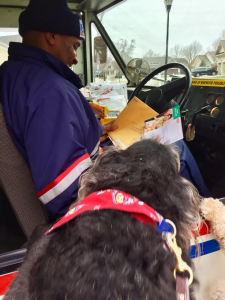 Before I was born there was a children’s television show called Mr. Rogers Neighborhood. Sometimes after a hard day at work, Doc will turn on an old rerun of Mr. Rogers and for a brief time we go back to his magical neighborhood.

Mr. Rogers was both soothing and kind in the way he interacted with his TV audience and the character’s on his show.  Not afraid to talk about feelings, he often covered topics like death or divorce that most adults shy away from. He understood that children needed a safe place to explore the feelings they were having about those challenges in life. He also discussed the importance of being kind to one another, something I think we need more of today.

Being kind doesn’t really need to be grand gesture, it’s often the little things that make the biggest impact. For example, the mailman on our street not only brings the mail, but he brings doggie treats to me and my friend Norman. We then respond by giving him a big lick on the hand as a thank you and that makes him smile. Now our mailman doesn’t have to do that, but he goes the extra mile because he loves dogs and he’s a nice person.

Every day we all have opprotunities to be kind to someone. Just saying thank you or opening a door can make someone’s day.  Sometimes just sitting quietly and listening to someone if they are having troubles can make all the difference. So this is my challenge to you. As we are now officially in the holiday season look for opportunities on a daily basis to do a kind deed for a stranger or a neighbor. If we all did this, think of what a nice neighborhood we could create. The kind that Mr. Rogers envisioned.