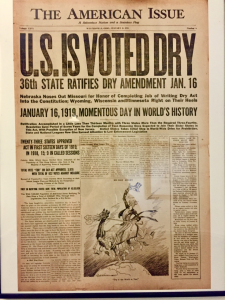 Doc has taken me to some interesting places, but where we went last Thursday ranks near the top. We started out at the Anti-Saloon League Museum in Westerville, Ohio. Doc had signed us up for a walking tour of a Temperance Timeline of Events that took us to all of the places involved in prohibition from 1893 to 2006. All of it was quite interesting, but my favorite part of the tour was the story about the Whiskey Wars at Corbin’s Saloon.

Henry Corbin ran the only saloon in Westerville, Ohio. Being that his neighbors were anti-alcohol they blew up the saloon in 1875. Apparently Mr. Corbin was not easily intimidated by his non-drinking neighbors, so he built another saloon in 1879 and you guessed it, the prohibitionists blew that one up too. In 1920, Prohibition became law across the entire United States so that was the end of legal alcohol sales for a while. When Prohibition was repealed in 1933 Henry Corbin started selling beer out of his downtown Westerville pool hall. The problem was that by now people were afraid to go into his establishment to buy it. They were probably afraid they might get blown up!

Eventually Corbin’s Saloon was rebuilt and still stands today at its original site. If Henry Corbin were still alive I think he would be surprised to know that Westerville did not allow alcohol to be served again until 2006. Today many establishments in Westerville serve alcohol although some residents still don’t approve. Doc told me there was even arguing and resistance in her own family. Her fathers’ side of the family were strict Methodists and thought alcohol to be the root of all evils. It is said that Doc’s great-grandmother after finding out that the local bartender served her son alcohol went down to the bar with a horse whip and threatened the bartender. you can bet that man never gave her son another drink.

So what do you think? I would love to hear your opinions both pro and against about Prohibition. 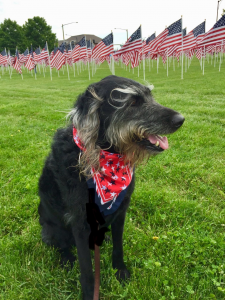 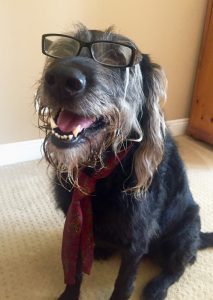 Just because I’m a dog doesn’t mean I am not interested in higher levels of thought. When Doc watches lectures from professors on U-Tube, buddy boy I am right next to her taking it all in. How do you think I get new information on human behaviors? Well this particular day, Doc was watching a lecture by a professor at Harvard on the brain and let me tell you it was interesting. Nerd alert, since I am not stingy with my knowledge, I am passing it on to you.

Although it is not my intention to offend, I have observed some humans act as if their territory is being threatened. I have seen people get mad and defensive about politics, when driving, fighting over stuff at the store, when making business decisions or basically anything that threatens their ego. It’s like watching primates throw poop at each other. Hey guys, we aren’t competing with the neighboring tribes on the Savannah any more, be nice.  But alas your primitive physiology is still influencing your behaviors.

Then there are those humans that take it to the next level. They are so influenced by that part of their brain that they let it take over any rational thought and the scheming and the scamming begins. Survival of the fittest turns into survival of the slickest. Yikes, the times I have been exposed to people like that I hide behind Doc, I can smell their insincerity.

Alas, there is good news. Humans have a prefrontal cortex and thus you have consciousness. You can then use that consciousness to be aware and educate and control your primitive desires and fears. Our prefrontal cortex can also help you to identify the “slick” among you, helping to keep you safe. The human brain is one marvelous miracle.

So what’s the moral of this tale? Don’t let your ego imprison you. Take control of your lizard brain before it controls you. But do give in sometimes when you get that urge for some ice cream. Yum!