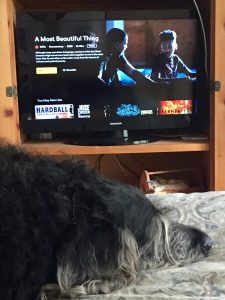 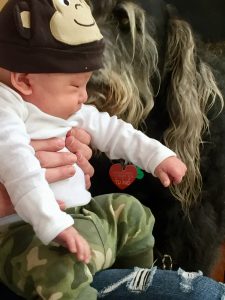 Last Saturday I got a nice surprise when I finally got to meet the new baby in our family. Baby Abraham is now 3 months old and already I love everything about him. Like Doc always says, ” There is nothing like a new baby in the family.”

Abraham showed up five weeks before he was due which tells me he was just extra excited to see all of us and the world. Born during the height of the pandemic, he is now thriving, happy and getting nice and chubby. When his mama put him down so I could be near him, I gave him lots of kisses and put my head in his lap so he would feel safe. He’s still so tiny compared to me I knew I needed to be extra gentle.

There is something so wonderful about a new life. It’s a reminder to us all that no matter what is happening in the world that life goes on. ” Each time a baby is born there is a possibility of reprieve. Each child is a new being, a potential prophet, a new spiritual prince, a new spark of light precipitated into the outer darkness.” R.D. Laing 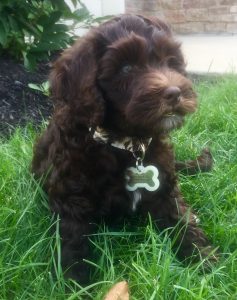 Finally the crisp fall weather showed up a few days ago and that’s not the only thing that has changed around here. So I thought I would take some time to update you on the latest scoop.

For more than a week I was sick to the bone. I will spare you the details, but I could not keep anything in my system. Doc tried everything to cure my ailments and finally when nothing would work, she took me to my nice veterinarian. After a shot in the butt and some antibiotic I am now back to my normal self. Now that I am better and Doc is no longer worried, she balled me out the other day. She found out I got sick from eating the bunny and raccoon poop that I like to snack on in our yard. Apparently it’s not good for you and can cause bacterial infections. Who knew? Doc was a bit upset to say the least. What I can’t understand is that what is gross to her is a gourmet treat to me.

Now for the best news. Last Saturday, Doc and I got a new next door neighbor. We found out when my best friend Norman came and stayed with us while his humans went out of town to pick up his new baby brother. Doc tried to warn Norman that his life was about to change, but there are just some things you don’t understand until you experience them.

Franklin is about 9 weeks old and full of spit and vinegar for such a little thing. He is literally only about the size of my head. It’s taken Norman some time to adjust now that he is no longer the top dog in the house, but they are really starting to enjoy each other.

Life is like that sometime, you can’t always prepare for what may be ahead but you can always remains open to adapt.

Stay well and take care until next time. 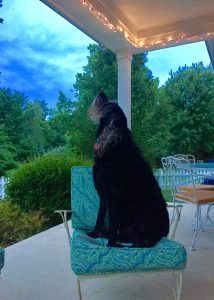 As the days become shorter and we move into fall, there is nothing better than sitting on the back porch with a cold bowl of water and my favorite human. The evening is my favorite time. Having finished work and our chores for the day we can just relax and put the daily grind behind us.

There is something quite magical that happens at dusk. It’s as if the world is winding down for it’s nightly slumber. The sounds of the children’s voices in the distance as they are getting in their last game of basketball as the street lights come on combined with the katydids singing always eases my mind. During this tough time we are all going through it helps me to feel like there is still a sense of normalcy in my little corner of the world.

Last night Doc told me that from the time she was a little girl she remembers sitting on the porch almost every evening with her father during the summer. She said they didn’t really talk about much, but to this day she remembers watching the sun set behind the barn and listening for the whistle of the train as it passed the crossing a mile from their house. I guess it’s those rituals that bring comfort to our lives.

So before it starts getting too cold, get your lawn chair and your favorite person or dog and spend an evening outside.

” This evening is as brief as the twinkling of an eye yet such twinkling is what eternity is made of.” Fred Rogers