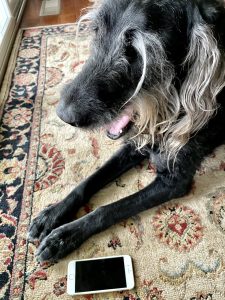 Pushing away the clutter in your brain so that you can focus on what you need to do to solve a problem can be challenging . Doc told me that you have to stop, refocus, think of what choices you have available and then try to come up with a solution.  It’s not as easy as it sounds. In fact, Doc was challenged to follow her own counsel when she made a human error last weekend that caused her a big headache and $$$.

It was a typical Saturday that started with a leisurely breakfast of eggs and bacon and then it was time to start cleaning the house. I was busily putting my toys away in a basket when I heard the first shriek coming from Doc’s bathroom.  I flew down the hall to see what was going on just in time to see Doc stick her hand in the toilet trying to retrieve her cell phone. The phone started making weird noises while flashing strange messages across the screen. Even SIRI yelled out for help in a gurgled voice as she became water logged in toilet bowl cleaner.  Horrified, Doc quickly removed the phone, dried it off and attempted some CPR to revive the poor thing, but it was deader than roadkill. As I looked Doc squarely in the eye I could see she was panicked. You humans seem to carry all your information in that little thing and are greatly attached to it. If you ask me that’s just not healthy.

So off we went to the phone store. I stayed calm while she was on the verge of a melt down. A sales technician approached and talked to both of us in a strange language that included information about retrieving things off of the iCloud and then he admonished Doc for not having enough gigabytes in her current wireless contract like she had committed a crime. Doc just sat there with a glazed look over her face nodding while looking like she was being tortured. After picking out a new phone, there was a two minute instruction on how to operate the thing and she was given an email address to transfer all her information from the iCloud to her new phone. I guess the iCloud is a very powerful force in the universe.

As soon as we got home, Doc got to work trying to retrieve her data. I sat beside her to keep her calm while silently chanting to the iCloud hoping it would release its strange power over Doc. You know how its hard to concentrate when you are stressed? Well the stress was compounded by the fact that Doc was having trouble remembering her password.” Rut Ro, I said softly this ain’t good”. After about an hour of trying every password and e-mail combination she could think of, the iCloud would just not relent so that is when I suggested we call in the big guns for help.

Nephew Scott, IT expert answered his phone while in the middle of a frisbee golf game. He made arrangements to come over the next day to help and Doc finally relaxed after hearing that.  On Sunday he arrived like a super hero. He went right to work using some mumbo jumbo magic that apparently the almighty iCloud understood and suddenly the information was released and sent down to earth and onto Doc’s new phone like mana from heaven. Alleluia!!

So what did I learn from all this? That Doc is human and gets stressed like the rest of us and that the iCloud is controlling human information and can only be intimidated by people with IT super powers. Oh yeah, and don’t drop your phone in the toilet. The End 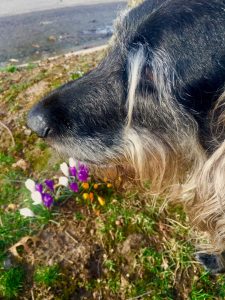 “Yippy Skippy!” I yelled out loud as I rolled side to side in the grass. I was taking in the warmth and sweetness of the first days of spring, happy the harshness and gloom of winter was over. I must have yelled too loud as I looked over and saw that I had startled Doc as she sat on the porch step basking in the rays of the afternoon sun. She didn’t seem annoyed at the interruption, in fact she smiled sweetly and came over to join me in the grass.” Grover, do you think we have a greater appreciation for spring this year because of  what we have been through with the pandemic?” she asked asked thoughtfully.  We sat quietly for the longest time as we mulled this over.

Everything seems so much brighter and sweeter to me this spring because of what we have been through I thought to myself. For the first time I am starting to feel some hope that better days are ahead. Since Doc and some of her family and friends have been vaccinated she is cautiously being in contact with more people and I am just as happy to see them as she is. It’s like we had to create our own world and live in a bubble for a year to stay safe. Trying to achieve balance of having some pieces of normalcy with caution attached by making sure to always wash our hands and paws, wear a mask and stay six feet away has been contrary to what we all needed and desired as living beings but it’s how we remained well. In the back of my mind there was always my concern that Doc might get sick with COVID and then what would we do? And now here we are moving forward with cautious optimism.

When I looked over at Doc it was like we had been thinking the same thing. ” Spring is about rebirth and I am ready to move ahead.” Doc said. ” ” I agree, I retorted. Just don’t act like Girls Gone Wild now that you have your vaccine,” I told her with a smirk on my face. “Don’t worry,” she said with a laugh, neither of us can get too wild, we both have to work every day. As we lay there in the grass for a while longer I couldn’t help to be thankful for the lessons we have learned and the good health we have maintained.

” Spring is painted in daffodil yellows, robin egg blues, new grass green and the brightness of hope for a better life,” Toni Sorenson 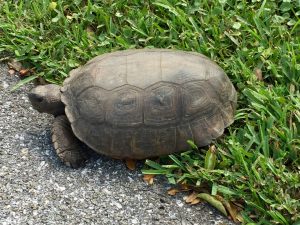 It’s important to take a break from your regular routine and that is just what Doc and I did last week. For one week we went our separate ways and I have to confess that it is true that absence makes the heart grow fonder.

Since vacation means to vacate, I went to spend time at my veterinarian’s office cheering up the staff and the sick animals. I love all the staff and after a year of not working, it was nice to give back to others again. Doc on the other hand left town and it sounds like all she did was eat, lay around and sleep for a week. That’s not my idea of a fun time but to each his own and we should do what restores us.

When Doc and I got back home again she told me that she was talking a walk the first morning of her vacation and came across a Tortoise moseying across the road. She said that she stopped and watched the slow precision and focus he had on his journey toward the water he was moving toward. ” I came to admire how he went about his task with such calm energy like he didn’t have one care in the world”, she said with wonder. “I guess that’s the problem I replied, we end up having ideas in our head about what we should be doing rather than what is best for our mental well being.” It occurred to both of us as we were discussing this that If we really listen to our inner voice and honor what we need, we would lead happier and healthier lives. Who knew you could learn so much from watching a turtle? 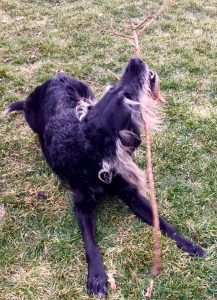 It took over a week for all the snow to melt here in the Midwest but when it did I found many treasures that had been buried for weeks. Two tennis balls that I though I misplaced, a frisbee and a very big stick I had become quite fond of were just part of what had been beneath all that ice and snow.

Doc forever vigilant concerning what I consume came right outside when she saw me chewing on the big branch, looked at me and shook her head. ” If you get sick from eating that bark, don’t you wake me up at night with an upset stomach.” she said with authority, Thinking quickly I retorted, ” I’ll have you know that just like President Teddy Roosevelt I too speak softly and carry a big stick.” ” Oh really, she exclaimed, do tell.”  I slowly began to formulate my words carefully because I knew I was in deep and needed to sound like I knew what I was talking about.

” Well I know the president was talking about the importance of  thinking about things before they happen and having a decisive plan before there is a military crisis, but I have a different spin on it.  You know Doc, more often than not you humans walk into situations without thinking things all the way through or procrastinate until you are in a pickle and are then forced to act in the midst of chaos. Then you all act shocked by what happened and call it bad luck when in fact it was your choices that got you into the problem in the first place. ” I said with conviction.  The stick my dear Doc represents the good boundaries we need to set with ourselves and others in order to avoid a crisis.”  I sat in the yard proud of what I had come up with when she replied, ” Nice try Grover you made a good point,  now put down that stick and come inside, for supper as she pointed to the door with a smile.”

As I walked past her into the house I made a mental note to myself to never try to outsmart Doc again.