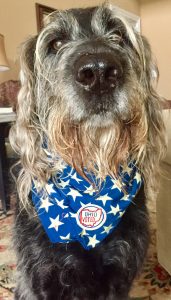 It’s only Wednesday and already we have knocked a lot off of our to do list. Doc loves her lists and I have to say it does help to keep us focused and leave us with a sense of accomplishment at the end of the day.

Number one on the list was to vote early at the election board and then for Doc to get her flu shot. So Monday morning we rose early and I waited patiently as I watched Doc fill out her mail in ballot that she was going to drop off. I was surprised that it took her so long, but she took the time to looked up voting records for judges on the ballot and levy’s she was not familiar with. When I questioned why she was so diligent in her choices she said it was important to know who and what you are voting for and to never take that for granted. I nodded in approval at her explanation.

After a short drive we arrived at the election board and you should have seen all the people lined up around the building to vote early. Now I wouldn’t have minded standing in the line and meeting all the people, but Doc just wanted to drive through and drop off her ballot. Some nice poll workers were waiting by the ballot box, took her ballot and said ” you have officially voted.” They then hand us a sticker that said Ohio Vote that I have been proudly showing off to everyone.

Next we went for Doc’s flu shot. When we got to the pharmacy she texted them and they came out to the car. She rolled down the window and to my surprise they gave her a shot right in the arm while we sat there. Now that’s good service! It’s been two days and I have had to listen to Doc complain that her arm is still sore. Good grief! I get shots at the veterinarian and she never hears me whining like that.  I got to thinking that if I ran the world I would set up a flu vaccine station where people go to vote. That way you could get both things done at the same place. How’s that for a genius idea?

As for today, Doc has more yard work to do this afternoon as the warmer weather comes to an end. I know I only have a few more weeks left to get all my holes dug in the yard before we get a deep freeze and the ground gets to hard.

Well that’s all I have to report for now. Stay safe and well until next time.