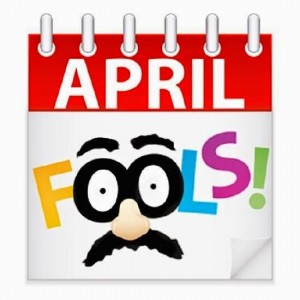 Now that I am a older, I have been trying to understand and embrace the holidays that human’s celebrate. When I heard about the tradition of April Fool’s Day, I was all in.  I immediately wanted to play a trick on Doc.  Now, I have to admit that the whole thing didn’t exactly go the way I planned it. Call it a momentary lack of judgment on my part, but at age two I still have puppy brain. Well that’s my excuse anyway.

Since I am new at this, the first thing I did was go on the internet to read up on the top April Fools pranks. One of the pranks entailed scraping the cream out of the middle of Oreo cookies and replacing it with toothpaste. Good, but not what I was looking for. I liked the idea about filling the middle of glazed donuts with mayonaise, but why waste good donuts? Another suggestion was making a copy of a scary monster face and placing it accross the toilet seat rim so when Doc would open the lid, the monster would be looking up at her. But, I decided it probably wasn’t a good idea to scare Doc with her pants down. Putting a hole in the bottom of her cup so liquid would leak out on her just seemed kind of juvenile. After much consideration, I came upon a plan that would be just the right trick.

While Doc was taking a nap one day, I got her gym bag out of the closet. I filled the bag with  the most embarassing things I could find. XXXL underware with big  pink flowers on it, hemorrhoid cream, an autographed picture of Barry Manilow and a fake ID for the Zombie Survival Club. I made sure there was identification with her name on it that could be seen as soon as the bag was opened.  Later that night when Doc went out to run some errands, I had one of Doc’s co-workers come over and get the bag so she could bring it to work for me the next morning. As soon as we got to the office on April 1st, I retrieved the bag from my co-conspiriter and carried it in my teeth down the dimly lit hall trying not to be discovered. When I got to the break room, I partially hid the bag behind a chair and left, waiting for it to be discovered. I could’t wait for someone to look through it to find out who it belonged to, bring it to Doc and embarass her. Then I would hold up a sign that said APRIL FOOLS!!

A few hours went by, when my nap was interrupted by an announcement over the intercom. ” Sergeant Ferguson to the break room, Sergeant Ferguson to the break room.” (Sergeant Ferguson is one of our special duty police officers.)  I could hear loud foot steps going up and down the hall and an order was given for everyone to  evacuate the building. After we filed outside to a safe area, we were told a suspicious bag was found in the break room and the bomb squad was on it’s way. My heart sank, I lay down on the lawn and covered my paws over my eyes. What had I done?  This sure wasn’t turning out the way I had planned. I heard Doc’s voice calling my name and I was scared, but I looked out from behind my paws to see every one standing there smiling. In unison they yelled at the top of their lungs ” APRIL FOOLS GROVER!”

I did learn a couple of lessons from this experience. I will think things through before I play any more pranks and  I will be more careful about who I trust to be my partner in crime. Some humans blab under pressure.