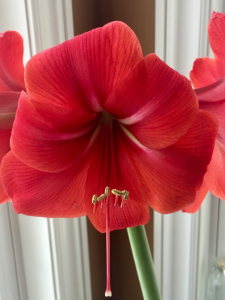 Just when you think you have conquered the life lesson of learning patience, something happens to remind you that you haven’t. I don’t mean to tattle, but Doc is a kind of hurry up and do it now kind of person. Let’s just say patience is not her virtue. I will have to hand it to her though, she realizes that about herself and tries to do better……..but let’s just say she has more work to do than she realizes.

On Christmas she received two flower bulbs. One was a  paper white (Narcissus) and the other an Amaryllis. She placed both of them in front of the window so that they would get plenty of light. The paper white grew fast and furious and within a few weeks was in full bloom. The Amaryllis bulb, well that was another story. We watched it and watched it for weeks on end until Doc thought it might be dead. Just when she was getting ready to throw it out she noticed that the leaves were starting to get longer. Every day we saw new growth, so she watered it, talked to it and it began to thrive and grow. It took almost 10 weeks, but over the weekend we came home to find that the flowers were starting to open. A few days later all of Doc’s nurturing and patience resulted in four big beautiful red blooms.

You know there is a lesson in all of this or I wouldn’t have told you this story. But the lesson is not only about the virtues of patience, it is also a metaphor for life. Sometimes the best thing you can do is to sit back, be supportive, nurturing and allow ourselves or someone we care about to grow without judgement. Now that can be hard to do as we all have opinions about how humans should live their lives, including oursleves.  But just likes Doc’s flower, if we create an environment that allows growth, beautiful blossoms will eventually appear.

” Patience is the calm acceptance that things can happen in a different order than you have in mind.” David G. Allen