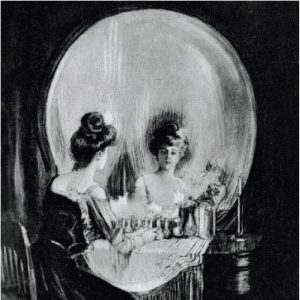 It’s amazing the emotions and memories that a picture can evoke. Recently Doc was given a drawing in a black frame titled “All is Vanity.” It belonged to her grandfather and the drawing is well over 100 years old.

Doc told me that when she would visit her grandfather she would sit and study the drawing and found it to be both fascinating and scary at the same time. The artist, C. Allen Gilbert drew the picture to remind us about the vanity and pride of man and as an allegory of death. When Doc’s grandfather would see her gazing at the picture, they would talk about what the drawing meant. With all those discussions so many years ago, she didn’t understand the emotions that were being attached to that drawing until the day the picture found its way back to her.

One day her niece called and told her she had acquired the picture from another family members estate and wondered if Doc would like it. When her niece came over and handed Doc the picture, she was surprised at the well of feelings that came to the surface. She cried with happiness over seeing the picture again and she promptly hung it where she could see it every day.

You see, I have learned from observing humans that when someone passes away the tangible objects that belonged to that person are the only things left and often bring comfort to the living. So it was for that simple drawing from Doc’s childhood so many years ago. The picture now has a new home and here it will stay until one of Doc’s family members becomes attached to it, knowing all the stories and generations of relatives that have cared for the woman who looks at her reflection.