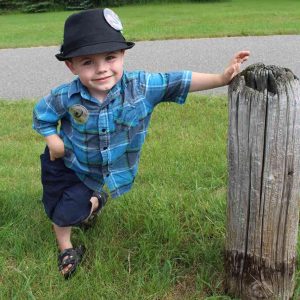 Even though I am a dog, I am still interested in American Politics. I wouldn’t exactly call myself political, more like an observer of pack behavior. Given all the squabbling among the politicians in the congress and the senate, I thought you might be interested in hearing about a new and refreshing type of leadership.

In the tiny town of Dorset, Minnesota they elect a new mayor every two years by picking a name out of a hat. Well a few years ago the winner was a three-year old named Robert Tufts. He does admit to going around and coercing the towns people into writing his name down on the pieces of paper that went in the hat. (They can vote as many times as they like for $1 per vote). Some people would call that stuffing the ballot box, but I view it as 3-year-old ingenuity.

Robert can be seen around town talking to the towns people, giving bait advice to the local fisherman and schmoozing with his friends at day care. But what got my attention about young Robert is the political  slogan that he lives by; “Being nice and no poopy talk.” If you ask me, Robert is wise beyond his years. Can you imagine if all of our politicians adopted these words of wisdom and lived by them?

I don’t need to tell you that this dog is impressed and If they would let canines vote he would definitely get mine. Bravo Robert Tufts!