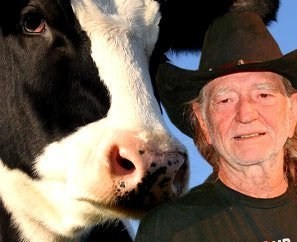 The other day while I was perusing on-line, an article popped up about dairy cattle having a distaste for country music, but specifically Willie Nelson. This may be hard to believe but someone actually did research on this. They found that milk production went down when the cows had to listen to his songs like “On the Road Again.”

Poor Willie. I kind of like his tunes and hope he is not taking this too personally, but many of the farmers report that when they play a Willie Nelson song the cows get all riled up. It turns out those heifers prefer producing their milk to music that is more of a slow jam like Barry White. In fact, it raises milk production by 3%. I can certainly see how Barry White would put those female cows in the Moo-d.

It’s kind of ironic that the cows don’t like Willie, because he happens to be a big advocate of the Animal Legal Defense Fund that advocates for humane treatment of cows. I wonder if that would change their minds? Maybe not, life can be strange that way sometimes. Every man, woman and cow has their own opinions about what matters to them.

As for myself, I am neutral when it comes to most music.  I guess those cows have a right to make the farmers play the music they like to listen to, after all what udder things do they have to look forward to while working?