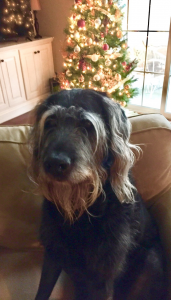 On Sunday morning after breakfast, Doc and I finally put up the Christmas tree. After getting it perfect in the stand we left it to be decorated for later in the day. We had Christmas shopping to do, some leaves to be raked and figured we would fit in the decorating before going to a holiday open house at 4pm. As you know, over planning and pushing yourself too hard always leads to stress. And that is exactly what happens.

Now you would think that Doc being the queen of stress management would practice what she preaches, but she does not always heed her own words. Things went fine until the tree decorating began. I could tell she was already tired from shopping and working in the yard, but she was bound and determined to tackle that tree even thought her body was telling her she needed to rest. After all, she was still recovery from a bought of bronchitis that had left her flat for a week.  So you can guess what was about to happen next.

She started by putting a garland of ribbons around the tree. She stepped back, shook her head and then took them off. She then placed them differently, shook her head and took them off again. Then she tried a different color of ribbon and once again she pulled them off the tree. Each time she went through this exercise I could sense her becoming more and more agitated until she was finally started talking to the tree in an abusive tone with some swear words thrown in for good measure.  At one point I thought she was going to throw the tree out the back door. I don’t like it when Doc’s energy becomes angry, so I finally went to another room until she was done with her tantrum. Luckily she was literally saved by the bell when I heard her phone alarm go off to remind her it was time to leave for the party.

It’s funny how a little distance and perspective can calm a person down. By the time we got to the open house, Doc had relaxed and was even laughing with friends about how out of whack she had become over something that should be fun and represent the season of peace and love. Another lesson learned.

After a night of rest and a new attitude Doc finished decorating the tree. We put on some Christmas music and actually enjoyed the experience, just like it should be. And you know what? It looks beautiful.