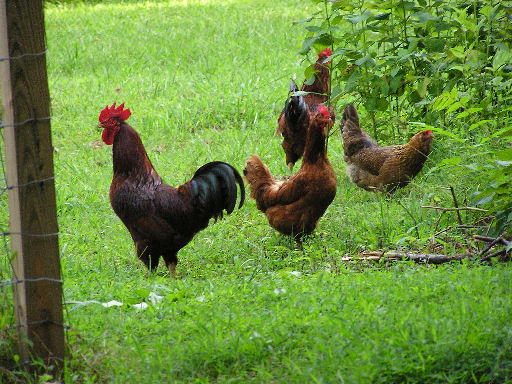 At times, you humans can come up with some very interesting ideas about life. Why, just the other day I was minding my own business while basking in the warm spring sun and happened to overhear some gossip about a couple that were using a parenting style called “free-range” parenting. I couldn’t imagine what they were talking about, as the only free range behavior I have seen, is with the chickens next door to the veterinarian’s office that run around the yard looking for grubs. As the discussion heated up, I moved in closer so I could hear every word in case I needed to fill Doc in later.

The neighbor’s debate started over a news story that two suburban parents came under scrutiny when they dropped off their 10 and six year old at a park one mile from their home to play and told them to be home by 6pm. As the children were walking home, the police stopped the children for being unsupervised and took them to Child Protective Services. (The law in their town states that all children under 18 need to be supervised.) This was the second time in four months the police picked the children up. The parents feel that allowing their children to play and walk alone in the neighborhood helps them to learn self-reliance and responsibility. As the discussion progressed, I learned about another parenting style called “helicopter parents.” The neighbor said a helicopter parent is a parent that pays extremely close attention to a child’s everyday life, especially at school and sometimes in sports. In other words, they are helicopter parents because they are always hovering overhead. These parents feel it’s their right to make parenting decisions for their children because they know their own children best and don’t think anyone outside of the family should interfere.

Good grief! I had heard enough and it was time for me to go inside and think all this over. When I was a puppy, my mom let my brothers and sisters gradually explore the world. If one of us went to far, she would grab us by the scruff of the neck and bring us back to her side. It was a balance of learning and guidance. When I went to live with Doc at 10 weeks old, she acted like one of those helicopter parents, hovering over every move, sneeze or whine. She was a really nervous dog mother. But a funny thing happened, as Doc got more confident raising me, she let me test my independence. Now I have learned to do things on my own, but also know that Doc is there if I need her.

When I went to tell Doc what I had been thinking about, she told me that one of the biggest lessons she has learned in life is the importance of having balance. Not to be too extreme on one side, or the other. I asked her if she felt balanced enough to try that “free range” parenting stuff with me. I shared with her my dream about having a childhood where I go anywhere I want, chasing animals through the fields, staying out all night, rolling in dead smelly things and hanging out with any dog that suites my fancy. I told her all of this would be in the name of learning self-reliance of course. She paused for a moment as if considering my proposal then looked down at me over her glasses, and said two words “fat chance.”