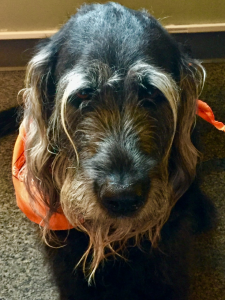 After two weeks of Doc and I being on vacation, we have finally returned to our normal routine and I for one am glad. When Doc and I came home from the lake, I didn’t realize that after a few days that she was going back for a second time and leaving me behind. The first I knew about the plan was when she packed up the car and took me over to the veterinarians office to be boarded there. You would have thought she would have discussed it with me before hand to at least prepare me. I am not just a piece of luggage you can just drop off anywhere, anytime. If I sound perturbed, it’s because I am and let me tell you the rest of the story so that you understand.

After Doc left I felt a little anxious and then to make matters worse they placed me in a kennel across from a very vocal beagle that would not be quiet. Even after I gave him the stink eye, he kept up his barking, howling and whining all day and all night. At first I tried to go with the flow but after a few days went by I started to ruminate and wondered if Doc was ever coming back. She had never left me so suddenly before and why hadn’t she taken me with her? The more I thought about it, the more I fretted and then became frightened. What if I became an orphan and had to live on my own? After a day of worry my stomach began to hurt, then I stopped eating and I even threw up.  Between my stomach and that loud mouth beagle I didn’t get any rest at all. What was I going to do?

Then just as suddenly as she left, Doc shows up to take me home all smiles, like nothing had happened. If I wouldn’t have been so relieved to see her I would have given her the silent treatment. The veterinarian told Doc that I worried myself sick and then they gave me a darn shot right in the behind to stop my nausea. Doc gave me a big hug and asked me why I was so worried. ” Grover, have I ever left you and not come back to get you?” she said with concern in her voice. ” No, I responded, but I just don’t like being away from you and thought you might not come back.” ” Oh Grover, she said, I promised you when you were just a puppy that I would always take care of you, never forget that.

When we finally got home I thought about what she had said but just to be on the safe side, I have been sticking to Doc like glue so she won’t escape without my noticing.