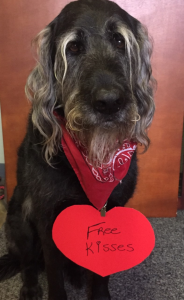 Tomorrow is February 14, a day that is dedicated to love. Now you would think that everyone would be in favor of a day about love but I have already seen some people on Facebook trashing Valentines Day. What the heck humans! As for myself, I am all about love and to prove it, Doc is going to take me around work tomorrow to give out free kisses and hugs to anyone that needs or wants one. Now doesn’t that sound like more fun than being a hater?

Being the inquisitive canine that I am, I got to wondering how Valentines day got started. So I had Doc help me to get on the internet (it’s hard to hit the keys when you don’t have opposable thumbs) so that I could do some research and this is what I found out.

Valentine was a Roman Priest during the rule of the emperor Claudius Gothicus. Claudius persecuted the church and prohibited the marriage of young people. He based this on his hypothesis that soldiers would fight better if they were unmarried. Valentine wasn’t having any of that malarkey, so he married couples in secret because he felt that marriage was sacred and should not be prohibited.  Of course Valentine was eventually caught and imprisoned. In 269 AD Valentine was sentenced to beating, stoning and decapitation all because he laid his life on the line for what he believed. Valentines martyrdom did not go unnoticed by the citizens in Rome and now he is known as the patron saint of lovers. Not a very romantic story, but it does give you a little more perspective. The day is about more than flowers, candy and romance. It also made me think about love on a deeper level.

After I told Doc about the origins of Valentines Day I informed her that in honor of St. Valentine I will not be getting her a card or any candy this year.  “It’s  important that we honor love in its purest organic form” I said.  ” Oh really”, she responded with a note of sarcasm in her voice. ” In that case would you like to come with me to the pet store so that I can return all of your Valentine’s treats? ” I looked back at her with pure sadness until she relented.  ” Grover we can do both, she responded. Lets eat junk while cuddling on the couch and thinking of ways we can spread our love to others.”  ” Good idea, I said, I think St. Valentine would approve.”