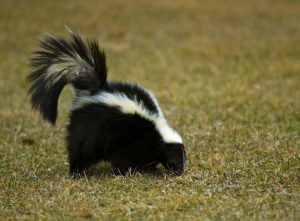 No one informed me that it was skunk mating season, but I should have guessed because I had been smelling what skunks consider their sweet perfume in the air. Let me tell you there is nothing sweet about it, it stinks. But to each his own, who am I to judge? Dogs like to smell each others privates to get in the mood for goodness sakes. But let’s get down to the meat of this story. You may recall that a few years ago I was sprayed in the face by a skunk that wandered under the fence. Did I learn from that experience? I will let you, my faithful readers be the judge.

Sunday morning I spotted my neighbor in his back yard with a long string attached to one of his trash cans. I watched as he slowly lowered it down into a window well. He would then pause and slowly try to raise it up. Being the nosy neighbor that I am. I couldn’t figure it out, so I called Doc over so that she could shed some light on the matter. Both of us stood there watching him for quite a while. Doc thought he may be bailing out some standing water due to all the melting snow and rain we have had lately. Soon we got bored and went on about our business.

After a while I was walking past the window and saw the trash can sitting in the yard and the neighbor was gone. ” How strange” I though to myself and then I saw the trash can move. Using my super canine vision I spotted a black and white hairy creature moving very slowly like it was stunned. I immediately started barking and growling to notify Doc and everybody else in ear shot that an alien invader was in our midst.

” What on earth is the emergency? ” Doc asked as she ran into the room.  I pointed toward the trash can. ” Its a skunk!” she hollered like we were in mortal danger. ” Let me out!” I begged. ” No way”, she said. “Didn’t you learn your lesson the last time you got sprayed? ” There I stood frustrated as I watched the skunk slowly make its way out of the trash can and into the yard. It finally meandered around the side of the house out of sight, but not before it sprayed the side of the house as a warning.

Disappointed I looked up at Doc. ” I didn’t let you outside because you would have gotten sprayed, obviously you didn’t learn anything from the last time you got skunked.” she said.  Doc right, she knows some of us are so hard-headed that we need to learn the same lesson over and over until we finally get it. I guess it’s like Doc tells me sometimes; ” There is none so blind as those that do not learn from their mistakes.”