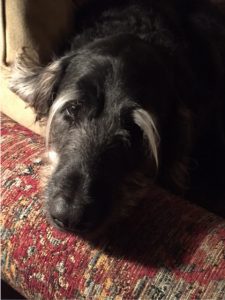 The humiliation of Doc putting me in time out was enough to really make me reflect on what I had done. She told me it wasn’t the act, it was the cover up that had gotten me in trouble . On top of that she was upset because I didn’t show one ounce of remorse. So Doc being Doc, told me a story to get her point across.

Recently she had read an article written by journalist Martin Schram that had reflected on an incident with the late Senator John McCain. Mr. Schram, while working for CNN had done a commentary on TV and wrote a column strongly criticizing Sen. McCain. The criticism had to do with Senator McCain rushing to the senate floor “hellbent on not just defeating one of President Bill Clinton’s nominees for federal judge ship, but doing it in a manner more repulsive than anything Mr. Schram had seen or read.” Mr. Schram reported that the Arizona senator read aloud the confidential psychiatric profile of Clinton’s nominee, who had received psychiatric services while serving in the military.

Prior to his report, Mr. Schram alerted McCain’s press secretary about what he would be saying. Later he gave his report on CNN, wrote his column and then went home.

The next morning Mr. Schram received a call from Senator McCain. Bracing for a dress down from the senator he was surprised when instead Senator McCain said to him softly that ” he had watched the commentary and read my column then he thanked me for it. He said I was absolutely right to criticize what he had done. Said I made him see how wrong he had been. Added he was “ashamed” of what he had done-but that what I’d written would make him a better person.”

After finishing the story Doc looked me in the eye and said; ” Grover everyone makes mistakes and does things wrong, that’s just a normal part of life. It’s how you handle your mistakes and what you learn from them that matters. It’s not a sign of weakness to admit you are wrong and ask for forgiveness. It actually shows strength and courage.”

Slowly I lifted my head, looked at Doc and told her what I had learned and asked for her forgiveness. She smiled and accepted my apology. Just one more lesson learned in this dogs life.