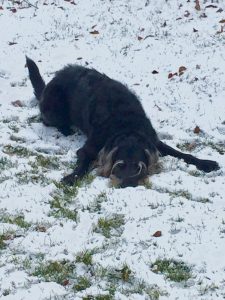 As the humans put away the holiday decorations and complain about the cold, dark and snowy days of winter, they seem to fall into a post-holiday trance. This is the only time of year where it’s acceptable to put on your PJ’s as soon as you get home from work. Just face it. Even though you paid good money for that gym membership and promised yourself that you would exercise every day, you know you’re not going to leave your house after you get home. In fact, the only calories you are going to burn is on the short walk to the couch to turn on the remote where you will binge watch old episodes of Mad Men. It’s kind of pathetic.

At my house the same thing is going on. Doc, who normally stays very busy, appears to has entered into a type of hypnotic hibernation. If she didn’t have to go to work, I think her wardrobe would consist of old sweat pants and that grey New Orleans hoodie with holes and some unknown stains on the front.

Because Doc isn’t being very vigilant, it is left up to me to guard the house from potential predators. So far this winter I have kept Doc safe from the UPS man invading our home, and most importantly, alerted her to a strange object that showed up one day in the neighbors yard. It looked human, as it wore a hat, had stick arms, a carrot nose and a scarf around the neck. When it didn’t move after all my growling and barking, I finally got the courage to go over, lift my leg and pee all over it. I do believe that my pee has special powers because by the next day after the sun came out, that weird things head has fallen onto the ground. Good riddance I say. That thing was creepy.

You would think that Doc would be thankful for me picking up the slack while she wallows in her lethargic state, but I barely get a pat on the head these days. I guess all I can hope for is an early spring. Until then, I guess I curl up on the couch under the blanket next to Doc. After all, there are worse ways to spend a cold winter’s night.