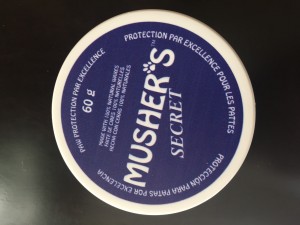 Well, the holidays are over and it’s the dead of winter in the Midwest. I would be lying if I didn’t admit that I kind of have the blues. After all the hustle and bustle from Thanksgiving through New Years with relatives coming and going, suddenly everything has stopped cold. So what’s a blog-writing dog to do to get out of my winter funk?

Just when I thought I would be stuck in the doldrums, I remembered that my friend and co-worker, Carol had given me a paw conditioner for Christmas called Musher’s Secret. Made with 100% natural waxes, I could imagine my paws becoming more subtle just thinking about it. There was just one problem, I would have to convince Doc to rub it on my paws.

Doc was sitting on the family room sofa engrossed in a novel when I approached her to ask if she would be interested in joining me for a relaxing spa treatment. Her face brightened and she looked mildly interested at first. As I explained that she would need to massage the cream into all four of my paws, she scrunched up her face and then glared at me in the eyes like an evil witch. ” Grover this sounds like another one of your schemes that you benefit from and I do all the work, how is that going to be relaxing for me?” I tried to explain that we would be bonding and that being with me would reduce her stress. “No way, she said, I think you should ask your friend Carol to massage your paws since she gave you the stuff.” Gee whiz, what a grouch.

There was only one choice left, so I sent Carol a text message. Thanking her for the lovely Christmas gift, I asked her if she would like to come over and bond with me by rubbing Musher’s Secret on my paws. So far I haven’t gotten a response.