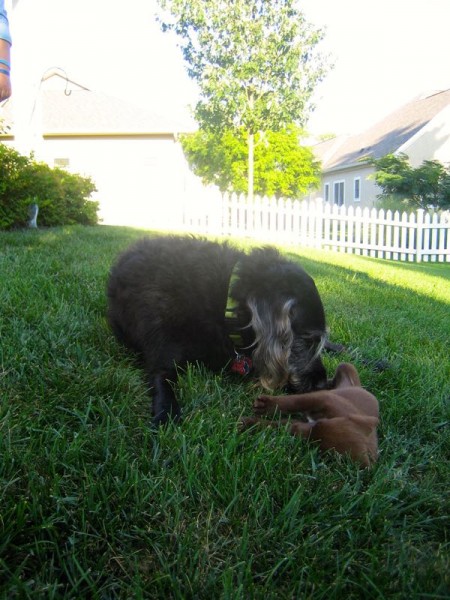 When Doc’s family arrived, I was outside in the back yard. There was a lot of commotion inside the house and at first I didn’t notice the plastic bin that Emily was carrying. I became curious when she opened the sliding glass door and approached Doc with a little brown and fury creature that was sound asleep.  Doc’s face lit up as she reached for the creature and then held it close to her chest. It was so tiny, not much bigger than my head. She placed it on the grass for me to inspect. When I got close enough to see I was horrified.

It was a new puppy and it’s name was O-Ren. I immediately began to panic. Was I being replaced? I had read about this kind of thing in the tabloids where Hollywood stars replace their old spouse with a newer, younger version. Was Doc going to do the same thing with me? My anxiety shot through the roof and I did what I always do when I’m anxious, I started running around the yard in circles at break neck speed.

“What’s wrong with Grover?” her nephew asked. Right away Doc understood and said “Oh he’s just nervous by all the attention we are paying to O-Ren. Then she looked at me and said “don’t worry Grover, he’s not coming to live here.”  That calmed me down right away, so I went over, sniffed the puppy again and decided to be nice. Soon we were laying side by side in the grass playing.

I was surprised at how I could have felt so insecure. Doc has always loved me so much and I should trust that love. Even a cute new puppy can’t change that.