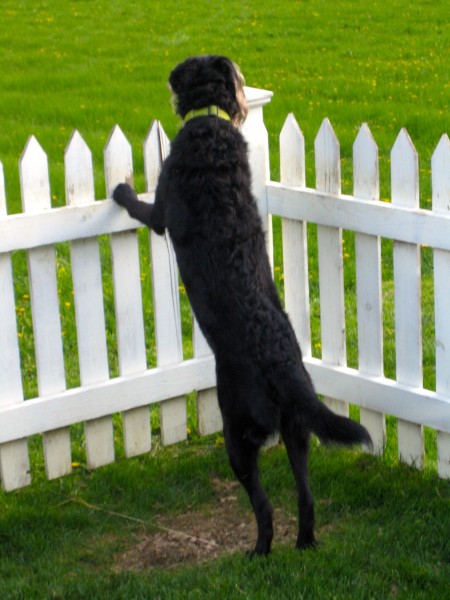 Doc didn’t notice the caramel colored fur ball streaking across the back yard, but I did. I ran as fast as I could over to the fence and placed my front paws on the top rung so I could see better.

Just as the four-legged thing turned the corner out of my sight, a man and his grandson came running by the house yelling, “Come here Bacon!” That’s the poor dogs name? No wonder she’s running away from home.

Doc happened to be coming out of the garage to take the trash to the curb just as Bacon ran by. After realizing the dog was an escapee, she burst into action. Running into the house,  she let me in from the back yard and said “Grover I need your help.” Out the front door we ran to the driveway where she had me sit by her side. ” Now watch what happens,” she said.

I don’t want to brag, but Bacon took one look at me and came tearing down the street, across four yards, came to a screeching halt and sniffed my butt.  With lightening speed, Doc reached down and grabbed Bacon by the collar before the poor dog knew what was happening. The happy owners looking relieved, ran over and put the leash on. Bacon’s brief taste of freedom had come to an end. After thanking Doc and I for our help, they headed home.

As Doc and I were walking back into the house, the next door neighbor yelled over to Doc ” good job, you two are just like a tag team.” He’s right, I thought, just like Batman and Robin. Doc and I could travel around town helping to capture lost dogs and return them to their loving homes. I could even wear a cape, mask and have special super powers, like shooting dog treats out of my paws. What a fantasy.