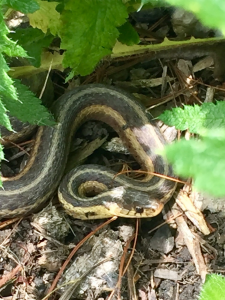 Nothing too exciting had happened since last week, until my fiend Norman came over to hang out yesterday afternoon. Since it was a nice spring day, Doc said we should all go outside and enjoy the weather. Norman and I went over to the fence to continue working on the hole we have been digging while Doc worked in the flower bed. All of us were happily communing with nature when Doc called over to us and said ” Come over here and look at this snake!”

Now I don’t have any personal experience with snakes, but my observation of most humans is that they run the other way. That was not the case with Doc, she gingerly moved back the leaves so she could get closer and take a picture.  ” Look how pretty it is, she said, it’s just a small Garter snake, they are quite timid and won’t bother you if you leave them alone”.  Norman and I looked at each other with concern and then I asked her,  “Then why are most people afraid of snakes? ” “Well there are many reasons, Doc responded. Some psychologists say the fear is hard-wired into the brain, but I think there are other reasons as well.” Like what?” Norman and I asked. ” You two ever hear that term snake in the grass or the tales of snakes being connected to Satan? And there is also the fact that many snakes are venomous.  They bite their prey, it dies and they eat it.” she said in a very matter of fact way. Norman and I looked at each other in horror as we slowly moved away from the slithery reptile.

After that explanation Norman and I asked to go back inside the house away from the snake that was still sunning itself like it was at the beach. Doc followed in right behind us still yakking about those darn snakes. ” You know, snakes are an important part of the environment, without them we would be completely overrun by rodents and pests. They help to keep nature in balance.

When Doc had finally finished her diatribe , I looked over at Norman and quietly said to him ” Why can’t they balance nature in someone else’s yard?”