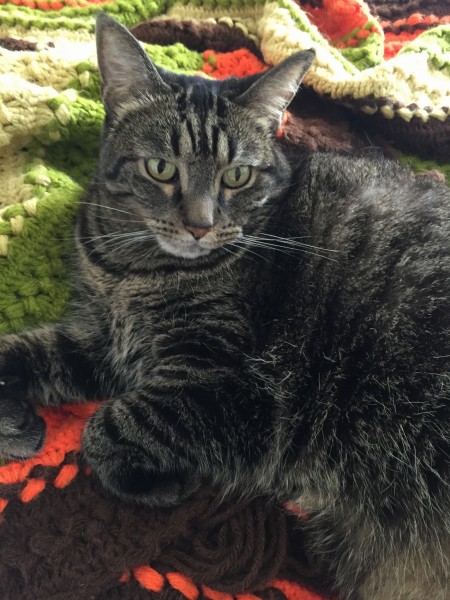 Doc has been helping her 92-year-old Aunt Pat go through the things in her apartment as she has moved and no longer needs all she has accumulated over the years. I have observed that you humans buy and collect a lot of stuff the first half of your life time and then try to get rid of it as you get older. You either toss it, recycle it, sell it or pawn it off on relatives that usually don’t want it either. If all else fails, you rent a storage unit and put your stuff in there and try to forget about it.

My life is more simple, my stuff consists of a water and food bowl, bed, leash, a tennis ball and a few other toys. Easy! What isn’t so easy is when one of the things that means the most to you is a cat or dog that you love and you may not be able to take it with you. That was the dilemma that Aunt Pat was having.

The first time I realized that Aunt Pat owned a cat was when she came to visit and I could smell it on her. That was ok, because it stayed at her house. Then one day Doc started talking to me about bringing the cat home to live with us because it may not be able to go with Aunt Pat. “Are you kidding me?” I asked. “Really!” Doc is loosing it if she thinks a cat is coming to our home to live. But you know Doc, she’s persistent and I do have to hand it to her, she would never let a living thing become homeless if she has any say so in the matter.

Ok I admit it, I was nervous. I had never lived with a cat and found them to be rather scary. Even when they’re little kittens they lunge at you. My only encounter with them is when I see them outside and they hiss at me and show those huge fangs. It’s enough to cause nightmares. So I started to worry, but didn’t tell anyone because I didn’t want anyone to think that a dog as big as myself would be, for lack of a better phrase…..a scaredy cat.

Well, guess what happened. Today Doc came home and told me that the cat gets to move to the new place with her aunt to see if it will work out. Whew! Looks like I dodged a bullet for now, but I’m not going to get too comfortable because I have also overheard Doc talk about bringing home an orphaned pot belly pig, what ever that is.