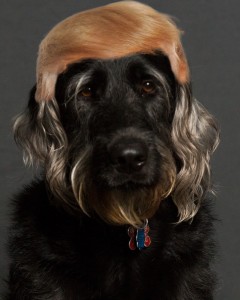 As a dog, I am not really interested in human politics, but you’d have to be living under a rock with no wi-fi to miss “The Donald” and all of the rest of the candidates running for president.”

It is interesting for me to listen to you humans debating and trying to figure out how the “Donald” is leading in the polls. From a dogs perspective, that’s an easy one to answer. So many humans like him because he is acting like he’s the alpha of the pack.

In the dog world, the rest of the pack always submits to the alpha by rolling on our backs and exposing our bellies. Now don’t get me wrong, sometimes there are disagreements among the pack. We will nip and growl to fight for status or attention, just like the politicians do in the primaries.

The alpha isn’t always everything that they seem. The pack leaders that ultimately prevail in the animal world are calm and assertive. Because calm- assertive energy has power and dogs do not follow unstable pack leaders. Nature is far to pure to be fooled by frustration, anger, fear or any other negative energy.

In the end, if you humans elect someone that does not end up being a stable pack leader, the good news is that you can be a calm-assertive leader in your own home with your family and your furry friends. Don’t underestimate how changes in your own environment can have a ripple effect.