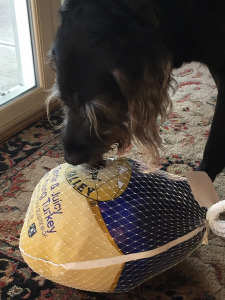 It was supposed to be a pleasant drive to the country for a morning hike, but what happened on the road left me wondering if Doc would end up on a Friday night episode of Dateline, Unsolved Mysteries.

Anytime we head somewhere new I get a giddy feeling inside. On the way I fantasize about all the new things I will smell, little critters I can chase and just the beauty of being back to nature with Doc. Everything was quiet as we were headed down the highway when suddenly Doc slammed on the brakes. Startled back into reality I looked out the window and saw a large beast with feathers sitting in the middle of the road. It was a big Tom turkey. Doc waited a minute to see if it would move, but it just sat there. Then she honked the horn. “Beep, Beep!” That turkey glared at Doc in the eye like she was the one in the way. She couldn’t drive around it because the road had a steep embankment on either side. She would never run over another living being with her car and I was too scared to chase such a strange-looking creature. So there we sat like cowboys in an old western waiting for the show down to begin.

I have read that turkeys are stupid, but I don’t know about that because what happened next should have been video taped and put on U-Tube. Doc’s first mistake was getting out of the car to try to shoo the bird away.  That turkey started gobbling, expanded it’s wings and began charging toward Doc like it meant business. I started barking trying to scare the thing, but that seemed to agitate it more. First it struck Doc in the leg with its beak and then she began shrieking while trying to push it away. Feathers went flying, I kept barking and the turkey kept charging. Finally Doc hightailed it into the car, slammed the door and while the turkey was busy attacking the side of the car, we were able to get away. Doc was so angry that the turkey attacked her and dented the side of her car that she exclaimed in a loud voice ” I ‘d like to wring that turkey’s neck.”

Weeks went by and to tell you the truth the whole incident was just a distant memory. It was getting close to Thanksgiving and I was thinking about all the good leftovers I would get. One day Doc came home and I could tell she was in a good mood. I noticed she was holding a large heavy bag with two hands. ” Look what I have.” she said. When she pulled the thing out of the bag I stopped in my tracks and gasped. It was a very large decapitated turkey. I approached slowly to examine it and noticed the poor things name was on the wrapping. Butterball was now dead and living in our fridge. What had Doc done?

On Thanksgiving day the family came over and we ate Butterball down to the bones. The evidence now gone, I swore to myself that I would never say a word about that day on the road.